In 2015, when President Obama was scheduled to attend the United Nations General Assembly held in in New York City, he broke a decades-long tradition when he changed his hotel plans prior to the event.

Previously, U.S. presidents and other high-ranking government officials had always stayed at the Waldorf Astoria hotel while visiting New York City. This hotel is known as one of the best hotels in the world. Frequent guests include celebrities and dignitaries from around the globe. 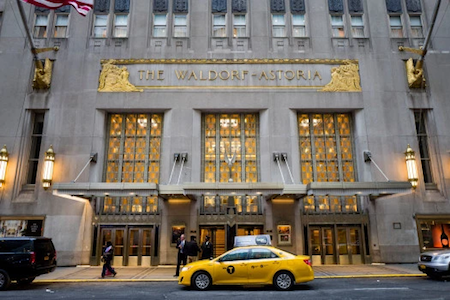 However, prior to the president’s planned stay, the hotel was sold by Hilton Worldwide Holdings to a company called Anbang Insurance Group. Now, you probably haven’t heard of Anbang — it isn’t exactly a household name like Hilton.

Anbang is a Chinese holding company with direct ties to many elite Chinese citizens and government officials. In fact, according to the Financial Times, “Anbang is one of China’s most politically connected companies. Wu Xiaohui, who founded the insurance group in 2004, is married to the granddaughter of Deng Xiaoping, China’s former leader.”

After purchasing the hotel, the company completed major renovations, which caused many guests to raise security concerns. While U.S. officials never admitted to surveillance and eavesdropping concerns, there is no question this is likely the No. 1 reason the president changed his travel plans.

It’s common knowledge that if you are an American traveling in China, there is a good chance your hotel room is under some sort of surveillance. However, most people never thought they would have to worry about these same security concerns in America just because a Chinese company happens to own a hotel.

Clearly, those people were wrong.

With that in mind, I want to share with you four travel security tips, whether you are staying overseas for business or just taking a weekend trip with your family:

Traveling inevitably opens you up to security vulnerabilities, but these four steps will help you stay safe when you stay away from home.

The biggest thing is if you don’t need a specific item, it’s best to leave it at home — where you should also have security measures in place to keep your belongings safe.