On a quiet Sunday afternoon, a man and a woman slumped on a bench in a crowded shopping center in southern England. In the ensuing days it would become clear they were the intended victims of a vicious chemical attack.

Part of a class of nerve agents developed in the Soviet Union in the 1970s, Novichoks are made up of two components that are less hazardous prior to mixing. This binary property makes Novichok agents (unlike other nerve agents) easier to handle and transport — and circumvents international chemical weapons treaties.

Novichok agents can exist in a solid, liquid and gaseous forms. They may be inhaled, ingested or absorbed through the skin. Some variants take effect in as little as 30 seconds while others have the potential for a slower release.

Regardless of the method of exposure, the symptoms are horrifying: 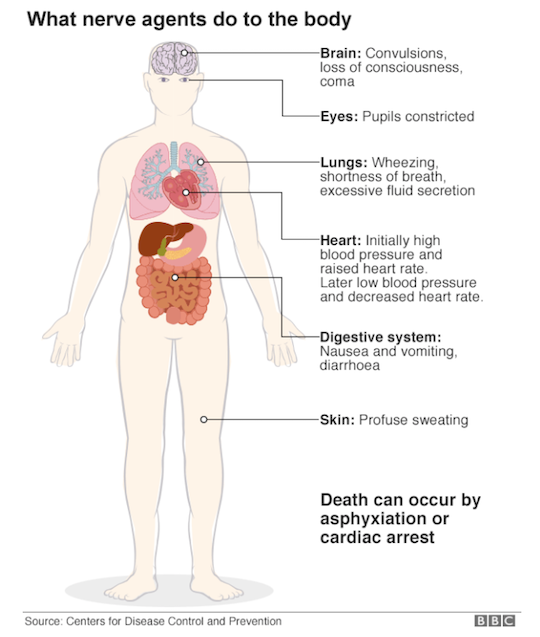 Flashback to One Year Ago…

Two women approached Jong Nam and sprayed liquid VX — another extremely toxic nerve agent — on his face and then covered it with a handkerchief. He suffered a painful death within half an hour.

It takes as little as 10 milligrams of VX — which stands for “venomous agent X” — simply making contact with your skin to cause death. It’s so lethal that 75% of those it touches will die within eight hours. (Compare that with certain Novichok variants that are five–eight times more deadly.)

KLIA is one of the biggest airports in Southeast Asia and the 23rd-busiest airport in the world. It’s extremely fortunate that no other passengers at the airport that day were exposed to the deadly chemical.

(In England, traces of Novichok were found at a restaurant and pub the Skripals had visited. But so far no other victims have been reported.)

Chemical weapons can be fatal in incredibly small doses, which is one of the reasons they are so hazardous. The effects of nerve agents are long-lasting and increase with continued exposure.

If you ever find yourself in the vicinity of a chemical attack, it is critical that you take the following steps to minimize the risks:

I hope we never have to deal with the reality of chemical warfare in the United States. But the truth is it’s a terrifying possibility that we may one day have to face.

Clearly, there are countries out there that are still developing and testing these types of weapons, so it’s important that you know what to do in the event of a chemical attack.

Vital survival drill almost no one thinks to do