Home Black Bag Confidential The Bigger They Are, The Harder We Fall

In this week’s rundown of must-read articles, size matters.

First, we’ll touch on the large-scale devastation in Puerto Rico…

Next, we’ll take a look at a weapon of mass destruction just waiting to be unleashed on our shores…

And that’s not all.

1. What Every American Needs to Know About Puerto Rico’s Hurricane Disaster

As the news cycle once again turns its attention to the latest Twitter feud consuming Capitol Hill, remember that approximately 3.4 million American citizens are suffering through a humanitarian crisis of epic proportions. In fact, experts believe the death toll could reach into the hundreds.

One factor making it incredibly difficult to get the island back on its feet is the lack of power — most of the island is still completely in the dark.

To put this disaster in perspective, here’s a handy infographic showing all the things we lose when we lose power: 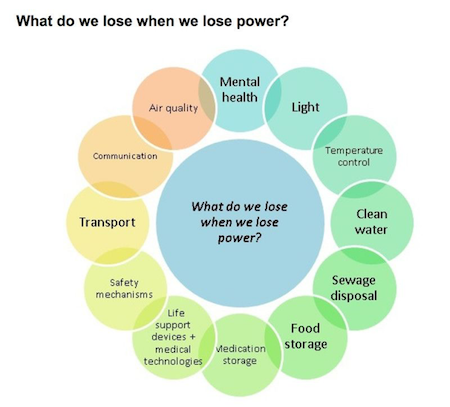 Check out the article above to learn nine things you should know about the dire situation your fellow Americans are enduring — plus six ways you can help.

2. 10 Uncommon Ways to Generate Electricity for Your Homestead

Speaking of power outages, I highly recommend taking a good look at this post from our friends over at Survivopedia. It runs down 10 gadgets you probably have lying around your house right now that can be rigged to generate electricity.

From CDs to bicycles and computer hard drives to fans, this piece shows you how to turn your junk into juice to power your home in a pinch. These tricks could also make for some fun rainy day projects for the whole family to enjoy. See for yourself.

3. We Are a Nation Unprepared

After months of research, I’m convinced that a possible “weapon of mass destruction” has been developed by our nation’s enemies and is aimed straight at the heart of America and our way of life.

I’m not talking about a nuclear event… or a biological attack… or any type of conventional warfare or weapon. But the long-term effects could be as destructive as any of these attacks.

What’s worse, intelligence agencies can’t predict or stop this attack, the military can’t defend against it and the government agencies you’d expect to help you after the fact are also completely unprepared.

But what can YOU do? Click on the link above to find out.

4. Yellowstone Supervolcano May Rumble to Life Faster Than Thought

Well, this is some unsettling news.

A new study analyzing the mineral composition of fossilized ash from the most recent mega-eruption in Yellowstone revealed that the sleeping supervolcano may wake up sooner than previously thought. When it does, you can expect the sh*t to really hit the fan.

Of course, National Geographic reports that “right now, the supervolcano does not seem to pose a threat.” But on the other hand, this article notes that almost everyone who studies the volcanic caldera says “we have no way of knowing when the next big blast will happen.”

Looks like this is just another disaster for which you need to be prepared. In the event the supervolcano does erupt, it could spew ash for hundreds, perhaps thousands, of miles, burying buildings, smothering crops and shutting down power plants — and Tommy Lee Jones won’t be able to save us.

If the SHTF — whether it’s caused by a mega-hurricane, weapon of mass destruction, supervolcano or some other catastrophe — the very fabric of our capitalist society will quickly unravel. Think of how many people you know whose entire net worth is “safe” in bank accounts, stock portfolios and real estate — maybe you’re one of them.

Well, if the grid goes down, all of these digital assets will disappear in an instant and the people with the power will be those who have something to trade. This list from the folks over at Survival Sullivan highlights 20 different items (besides gold) you ought to consider stockpiling as alternative currency options.

Because when the streets run red, barter will be the new black.