Home Black Bag Confidential How to Survive a Lightning Strike

You can’t watch the news lately without seeing the damage and destruction Mother Nature is inflicting on us. Whether it’s hurricanes, tornados or wildfires — we are being inundated with devastating natural disasters.

Even though timing and trajectories can be predicted for many of these disastrous events (or you may live in an area that won’t be affected), there is one deadly force that does not discriminate its victims.

Right now, there are approximately 2,000 thunderstorms happening somewhere on the planet, which produce more than 8 MILLION lightning strikes per day. 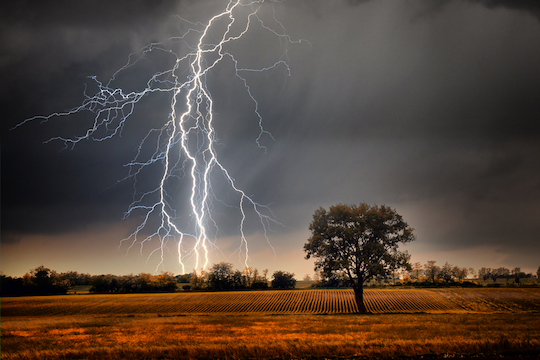 Surprisingly, only one in four people who actually get hit by lighting dies. And fortunately, there are also several survival techniques that will minimize your chances of becoming a target of one of these random shots fired from above.

Those who have been killed by lightning were usually taking cover under a tree or standing next to a telephone pole (or hanging out with that guy in Benjamin Button).

Others were talking on their cellphones while leaning against a metal signpost, walking on top of a metal sidewalk grate or touching a metal fence — ALL things that attract lightning.

WHAT CAN YOU DO?

Basically, there are two groups of folks who are victims of lightning strikes:

The National Weather Service has a 30/30 rule, which urges you to count the “flash-to-bang” time. When you see a flash of lightning, begin counting. If you cannot count to 30 seconds before you hear the thunderclap, you need to proceed to shelter immediately.

After hearing the last clap of thunder, you must stay inside for 30 minutes before it is safe to resume any outdoor activities.

Lightning strikes are one of the most unpredictable natural phenomena, but if you remember this advice, you can avoid becoming a victim.