There are moments in everyone’s life that they will never forget. This article is about one of my top 10.

Within a month of leaving active duty in the SEAL teams, I found myself in Los Angeles “chasing the dream” to become a big star.

It started with stunt work (stuntmen are the best people in that business), which was a natural progression for any former Navy SEAL, and soon grew to minor roles in television and film.

Within a year, I was offered the role of host for the Spike TV original series Surviving Disaster — which has aired in over 150 countries to date. I really enjoyed working in front of the camera in that capacity and apparently Spike liked what they saw and offered me another show called USA vs. the World.

The concept of the show was pretty straightforward. I would build a team of individuals from the U.S. who were considered the best at their craft and join them. Then we would take our team and challenge a team of experts from a different country to see who was truly the best.

It was decided that the pilot episode would be based on wild boar hunting, and we would compete against a team from France. The first half of the show introduced the American team and showed us training together prior to our trip to compete abroad.

I travelled to a ranch about 100 miles south of Houston that specialized in wild boar hunting and met my team — all of whom had decades of boar-hunting experience.

The training began the next day, and as I was preparing my rifle, one of the producers from Spike said I wouldn’t need it. My confusion was quickly resolved when one of my teammates informed me that my first wild boar kill had to be done with a knife…

A BIT ABOUT WILD BOARS

Wild boars are a big problem in many areas of the world, including several Southern states here in the U.S. They are very aggressive animals that can grow to over 400 pounds.

Sows begin breeding within six months of age and generally produce two litters per year up to 15 piglets per litter. One boar can root (destroy) one acre of land in a 24-hour period and — if left unchecked — these hogs can completely take over.

The most common technique used for hunting wild boars incorporates the use of dogs.

Bay dogs are released first to chase a boar down. Once they corner it, they begin barking loudly to signal the location of the animal. After that, the catch dogs are released to incapacitate the hog by latching onto its ears and seizing control of the boar until hunters arrive on scene.

Well, it didn’t take long before our bay dogs had located a boar. So there I was, knife in hand, sprinting through thick, skin-ripping Texas brush with the camera crew and producer close behind.

The catch dogs were released and I heard the wild sounds of a screaming fight no more than 25 yards ahead of me. I emerged from the brush to see a 350-pound boar wrestling with a catch dog attached to each ear.

I sprinted in and mounted the back of this thrashing, wild beast that was fighting for its life. I threw aside the catch dog attached to the boar’s right ear and plunged my blade into the boar’s heart three times until it became lifeless. 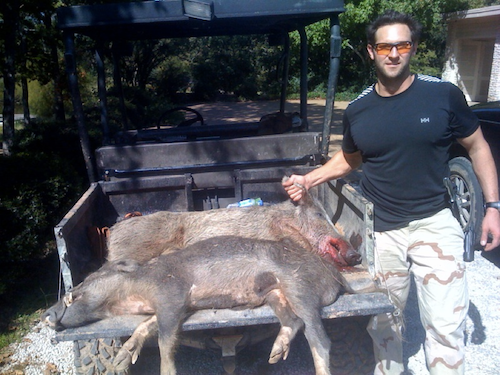 I dismounted the boar and turned around to see the producer from the network begin to vomit. Guess he didn’t take this class in law school.

That was a wild experience I will never forget.

I later found out that the “first kill has to be a knife kill” thing was a joke, but when I agreed to do it, my teammates didn’t say a word.

P.S. A week later, we traveled to the south of France, where we killed 12 wild boars during our 24-hour hunt. The French got three. USA!