Over the weekend, I was driving my daughter to practice and, lo and behold, there were about 150 people marching down the street calling for gun control.

Most of them were young — about high school age. I looked at their posters and had the following thoughts.

When I was in high school, I was pretty much a knucklehead. I liked girls, cars and shooting BB guns in the woods.

And although I’ve always been patriotic, I was too young to truly appreciate the freedoms we have in this country — and the sacrifices that others have made to keep our country free.

My point is I don’t blame some 14-year-old kid who’s marching down the street saying guns should be banned, because kids are very impressionable. (I do, however, blame the adults who influenced them.)

I’m pretty sure that during my lifetime, common sense will become nonexistent.

The First Amendment guarantees the freedoms of speech, the press and the right to peaceably assemble. But I believe (and I think you would agree with me here) that it’s the Second Amendment that protects the others.

Part of me would love to send these protesters to a country where private citizens cannot own guns — somewhere like North Korea, China or Cuba. I’d tell them to try to protest in these countries and see how it works out.

But think about how our lives would change if guns were banned and the Second Amendment were removed from the Bill of Rights.

We don’t need to look very far — many other countries have shown us the horrors that could occur. I can honestly say that I would rather die than live under some type of oppressive communist regime.

Anyone who thinks a complete ban on guns is the answer is essentially asking for that. This is why for the rest of my life I will do what I can to support responsible gun ownership and the Second Amendment.

Honestly, I think every American should have a gun — even if it’s just for home-defense purposes. That being said, it is critical that you store your guns properly and follow the “four rules of firearms safety.”

Check out the following video segment featured on The Security Brief, a daily talk show with Paul Viollis about crime and solutions.

In this clip, I present several options for easy, accessible and safe gun storage — as well as review the four basic rules of firearms safety. 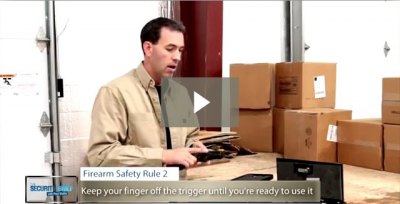 P.S. I always welcome feedback from my readers. If you agree, disagree or have any thoughts you’d like to add to this discussion, send an email to SPYfeedback@LFB.org.

How to embrace “gross” gunfighting tactics to survive