Home Black Bag Confidential You Can’t Take It With You — Or Can You?

The holiday season is right around the corner, which means many people are busy confirming their travel plans to visit friends and family members near and far.

The first few questions from this week’s batch of reader mail bring up several ways to stay safe when traveling by plane. Then we dive into other issues of personal protection, preparedness and ammo storage.

I liked Cade’s article, “Danger in the Skies,” from a recent issue of Spy & Survival Briefing. I’ve read on this subject before in a book about survival, and I always insist my family dresses for safety on a plane. We always notice plenty of others who aren’t.One thing I have struggled with is that I would want to grab my camera gear in an emergency — I would also be freaking out about my purse.

But as I just read the article, I decided that next time I fly, I am going to take a fanny pack with me. I can transfer my billfold, cellphone, camera memory cards and any other smaller important items into that fanny pack. Then I wouldn’t give a second thought to leaving my expensive gear, etc. behind during an emergency.

That’s a great idea, Rhondi, and an easy way to ensure you keep those items with you in the event of an emergency.

Of course, most personal belongings — no matter what they are or how much they cost — can be replaced. Your life or the life of a loved one can’t be. Which is why my main concern is getting off the plane quickly and safely.

Loved the book and the flashlights. I’m just waiting for the knife to arrive. Also, how do you take the tactical pen through airport security?

When I travel, I typically put my tactical pen inside my carry-on and send it through the security screening. Put the cap on the sharp end so the screeners can see that it’s a writing pen.

Never carry the pen on your body or put it in the little tray with your wallet. Crazy as it sounds, I’ve heard of some people who will show off the pen or even tell the security screeners about it.

The thing is, TSA agents can take away any item they deem dangerous, so if you try to show off, they will most likely take your tactical pen away. That being said, I’ve traveled all over the world with my tactical pen and never had any issues. Click here to get one for yourself or to purchase them for family and friends.

How many gallons before the filter in the SurvFilter needs replacement?

The SurvFilter can filter up to 250 gallons before you need to replace the filter. If it’s just you in a crisis situation, one filter will last you a very long time, because a person only needs one gallon of water per day to survive.

Could you please show me a picture of your neck knife? Thanks.

Sure thing, John. Here you go… 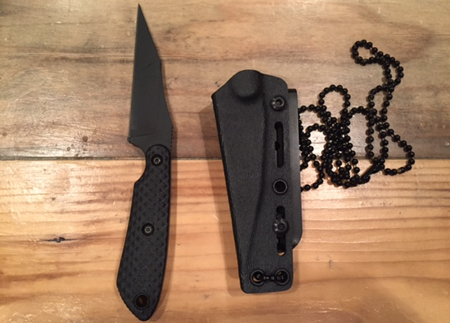 Now, keep in mind this is a custom neck knife I had made for me, although you can find many similar designs out there. Just be sure not to skimp on quality.

Overall, a neck knife is a tool that can come in handy when you need it most. Even though there are pros and cons to wearing a knife around your neck, in my opinion, it’s a great idea — especially if you are restricted in carrying a knife elsewhere on your body.

Here is another alternative for those that have ammo that has been submerged. The two most expensive components in a smokeless powder cartridge are the bullet and the brass case. A person could easily recoup about half of their ammo cost by selling their rounds to commercial reloaders to remanufacture or disassemble and reload themselves. The old primers are made inert by soaking in oil. The powder is easily disposed of as well.

Thanks for sharing, Randy! This is a great idea to try to recover some of your investment.

Obviously, losing hundreds or thousands of rounds of ammo could be financially damaging, so any amount of money you can recoup by selling the bad ammo is worth a try.

You just did a piece on submerged and wet ammo. Very pertinent advice — thank you!

What do you have to say about older ammo? For example: In the late 1970s and early 1980s a lot of folks bought bricks of .22 caliber rounds and hundreds — sometimes thousands — of higher-caliber rounds because of the threat of confiscation during some of those years.

Ammunition doesn’t necessarily have an expiration date, Ellis. However, it can go bad over time depending on the storage conditions.

If you’ve kept your ammo in a damp basement for the last 30 or 40 years, I hate to break it to you — but it’s probably gone bad from the moisture. That being said, if you live in a dry climate and store your ammo at reasonable temperatures, then it could last for decades.

The best way to store ammo is in a cool, dry place. That’s what I do and I don’t ever worry about my ammo getting ruined.