Home Alerts Protect What You Own in Volatile Times

Today I bring you advice from Ed D’Agostino, general manager of the Hard Assets Alliance. Ed discusses another aspect of self-protection: safeguarding your wealth.

Read on to find out the best way to preserve your family’s wealth in these troubled times.

In the face of such volatility, it’s more important than ever to think about protecting your home, your family and your wealth.

The best way to hedge your bets and protect your family’s nest egg against a roiling economy is to invest in gold.

But what is gold actually worth? I get this question all the time.

The answer requires I ask a question of my own: What is your currency worth?

The U.S. dollar has been relatively strong when compared to other currencies. Here’s a chart of gold’s price in U.S. dollars, over the past five years. 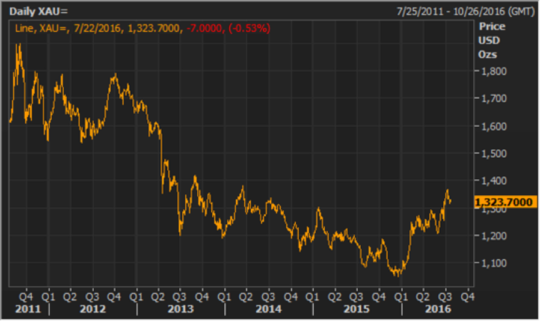 But take a look at gold when priced in yen. 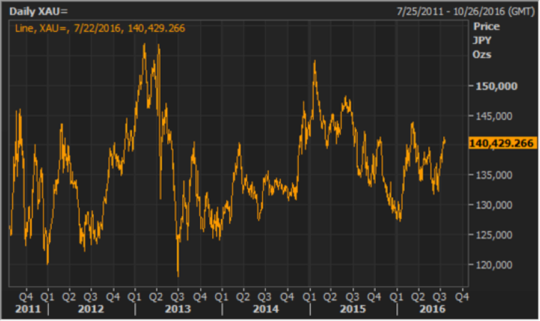 That’s serious volatility! Japan is the third-largest economy in the world and its currency is actively traded. In fact, Japanese government bonds are considered a safe haven by many investors. Clearly those same investors have concerns about the underlying safety and security of the currency, given the massive monetary stimulus underway in Japan.

In other words, when compared with gold, the Japanese yen is not what I would call “stable.” 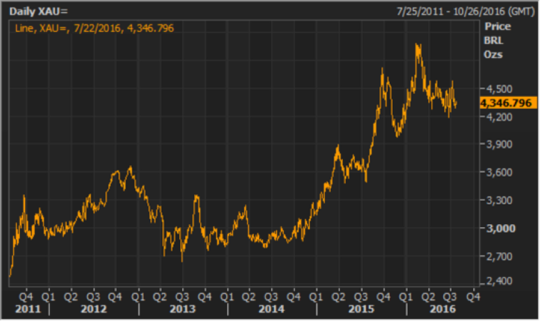 We all know Brazil is in a period of political turmoil. That turmoil is causing their currency to weaken. Brazilians are having to pay up if they want to buy gold.

It’s clear why the value of your currency matters when considering gold’s worth. But here are a few more charts that might surprise you.

Check out gold’s action when priced in British pounds, post-Brexit. 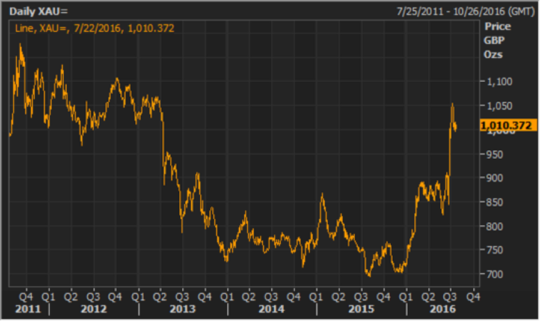 And here’s gold in euros… 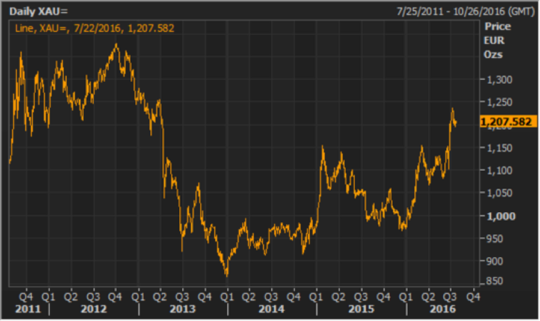 Gold’s price, in almost every currency except the U.S. dollar, is up considerably over the past three years. Does that mean the dollar is inherently stronger and therefore immune to these swings in value when compared with gold? I would argue not.

Just like Japan and Europe, the U.S. is involved in the global currency wars. Why?

There are many reasons, but one major reason is a strong dollar can hurt U.S. companies.

A domino effect kicks in as the dollar gains strength… a strong dollar leads to a drop in U.S. corporate profits… leading to a drop in the stock market… leading to an easing of monetary policy, intended to prop up the market and U.S. companies.

All it takes is the loss of faith in one currency, even a relatively minor currency — to trigger a broader crisis. And that will impact all currencies, including yours (wherever you may be).

These charts illustrate the value gold has as a store of wealth. It works, regardless of your currency, your location or your wealth. But the bigger takeaway these charts reveal is, right now, when valued in U.S. dollars, gold is a bargain at today’s prices.

If faith in the global monetary system is shaken, the oldest currency in the world, gold, will be the one that investors flock to.

Ed D’Agostino is general manager of the Hard Assets Alliance.

[Ed note: Buying and selling precious metals can be a chore. But the Hard Assets Alliance makes it easy with their simple interface and fair market pricing model. To get your precious metals questions answered, claim a free SmartMetals Action Kit, here.]