What if I told you that the march of human progress could be traced in a direct line from the Epicureans of Ancient Greece… through the 18th Century’s cure for smallpox… to where Steve Jobs and Bill Gates found inspiration as scrappy teenagers… to the flying car of tomorrow?

Stay with me and I’ll show you how this is possible, and what makes societies great, economies boom… and how (fear not!), modern-day heroes are alive and well, fighting for “team earth.”

But first, we start with a question: Why has America flourished for so long?

We’re convinced it was the culture that made all the difference.

A culture that was founded in the spirit of enlightenment scholarship, with roots that stem back to the Epicureans of Ancient Greece… from a time when Democritus conceived of atoms, long before microscopes had been invented.

The Constitution of the U.S., and its other founding documents, clearly reflect the same love of free inquiry, free expression, scientific experiment and the right to pursue and test these things. It was an act of defiance against classic conflicts such as disease, ignorance and stupidity, unnecessary suffering, and tyranny… all in favor of uplifting the human condition.

The Founding Fathers believed it was the right of any individual to pursue these trials… to constantly be on the verge of a great harvest of knowledge and wisdom, that doing these things for their own sake was emancipating in itself. And without question, empowering.

It’s no coincidence that these were men and women who were interested in biology, medicine, law and engineering — to name a few.

Thomas Jefferson, for example (it’s said that to write about America is to write about Jefferson in some form or another), was skilled in all those fields and more (the criteria for president, it seems, have degraded over the generations). Even, and especially, when the country was in extraordinary transition were these subjects explored.

Is there anyone reading these words that doubts we are in such a transition today?

Without hesitation, for instance, Jefferson eagerly organized a system for a valid method to produce, transport, cool and keep cool the smallpox vaccine so that it would not lose its efficacy. This vaccine, it’s worth mentioning, he would extend to all the slaves at his Virginia home, Monticello.

With Jefferson’s support, Dr. Edward Jenner, “the father of immunology” — who took to heart his mentor John Hunter’s Enlightenment command: “Don’t think; try,” — was able to, according to some, “save more lives than the work of any other man” with his pioneering work.

The knowledge of the smallpox vaccine would expand to and through Europe and beyond. Nearly 200 years later, in 1979, through the collaboration of like-minded individuals who carried the torch for human progress, smallpox was declared an eradicated disease by the World Health Organization. 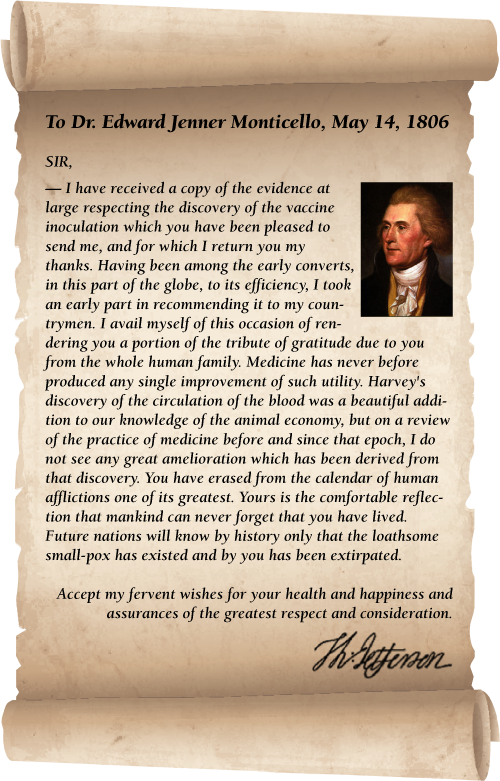 Imagine the innovations now in the works that will, like Jenning’s smallpox vaccine which Jefferson supported, one day eradicate other diseases… and countless other limitations on the human condition.

It’s not as hard to imagine the resistance that these advances bump up against… the knee-jerk fear we all have to some extent of the unknown. Back in Jefferson’s day, there was, of course, controversy surrounding the smallpox innovation. Some accused Dr. Jenner of interfering with God’s will.

The more educated a nation’s citizens, the less control a population would need.

Yes, while human nature is a slow-moving evolution, the American Experiment overcame these limitations through its culture of liberated ideas. To borrow a colorful metaphor from Matt Ridley’s The Rational Optimist, prevailing progress throughout U.S. history can be traced back to how “ideas have sex.”

“Exchange is to cultural evolution as sex is to biological evolution,” he says. Rather than genes, it is ideas that are exchanged between human minds that breed innovation and economic growth.

“Even allowing for the hundreds of millions who still live in abject poverty, disease and want, this generation of human beings has access to more calories, watts, lumen hours, square feet, gigabytes, megahertz, light-years, nanometers, bushels per acre, miles per gallon, food miles, air miles and, of course, dollars than any that went before. They have more Velcro, vaccines, vitamins, shoes, singers, soap operas, mango slicers, sexual partners, tennis rackets, guided missiles and anything else they could even imagine needing.

This philosophy of tearing down barriers in order to allow ideas to breed… is what makes societies great and economies boom. That’s also the credo that was also embodied in a computer revolution happening around the same time that Steve Jobs and Bill Gates were making a name for themselves. It has grown over time. Maybe you’ve heard of it? If not, don’t worry.

Back when computers were first being built in the 1970s, the technology was so new that people would pass their software around to one another at places like the Homebrew Computer Club.

It wasn’t until the late 1970s or early 1980s that people started “closing” their software and forbidding others to look, change or even fix it. Bill Gates was one of the biggest proponents of proprietary software. In a famous open letter to hobbyists, he asked anyone using Window’s software to pay up.

But a loose confederation of hackers challenged Windows by collaborating on what’s called “open source” software. This label extends to many different technologies… but most famously, it was adopted by Linux (which far exceeded investors’ expectations when its stock went public).

To make it easier to understand how open source is different than proprietary software, people use the play on words “copyleft” to describe it:

Copyleft: Making a creative work as freely available to be modified, and requiring all modified and extended versions of the creative work to be free as well.

Basically, the idea of “copyleft” was that not having intellectual property rights over software would actually encourage people to collaborate and change the technology based on how they want to use it. In a free market context, it could be considered a form of “hypercapitalism”. And with each time it passed through peoples’ hands, it was modified, improved and passed on again.

So why on earth have I told you this story?

The implications for the future cannot be overemphasized. The markets are in for a tsunami of innovation that will disrupt the energy, automotive and computer industries.

“… there was a wall of Tesla patents in the lobby of our Palo Alto headquarters,” said superstar Elon Musk yesterday. “That is no longer the case.”

“They have been removed, in the spirit of the open source movement, for the advancement of electric vehicle technology.”

That’s right. Musk just enlisted a militia of innovators to take and improve upon his electric vehicle designs. But there is a savvy business tactic in here as well. Tesla Motors has established infrastructure to benefit from new demand from electric vehicle users. The company is getting into the big battery business, and it already has electric charging stations throughout the country.

As Musk said recently while being interviewed about his $5 billion battery factory, “There will have to be hundreds of [similar] Gigafactories.” Tesla is at the top of the food chain, and it’s giving away free seeds to grow an ecosystem that it can ultimately feast upon.

Below, we’ve copied Elon Musk’s announcement that his electric vehicle patents are going open source. Read on… It’ll make you proud to be a Tesla owner and/or shareholder… or simply a more optimistic, temporary resident of a threatened planet:

All Our Patent Are Belong to You

Yesterday, there was a wall of Tesla patents in the lobby of our Palo Alto headquarters. That is no longer the case. They have been removed, in the spirit of the open source movement, for the advancement of electric vehicle technology.

Tesla Motors was created to accelerate the advent of sustainable transport.

If we clear a path to the creation of compelling electric vehicles, but then lay intellectual property landmines behind us to inhibit others, we are acting in a manner contrary to that goal. Tesla will not initiate patent lawsuits against anyone who, in good faith, wants to use our technology.

When I started out with my first company, Zip2, I thought patents were a good thing and worked hard to obtain them. And maybe they were good long ago, but too often these days they serve merely to stifle progress, entrench the positions of giant corporations and enrich those in the legal profession, rather than the actual inventors. After Zip2, when I realized that receiving a patent really just meant that you bought a lottery ticket to a lawsuit, I avoided them whenever possible.

At Tesla, however, we felt compelled to create patents out of concern that the big car companies would copy our technology and then use their massive manufacturing, sales and marketing power to overwhelm Tesla. We couldn’t have been more wrong.

The unfortunate reality is the opposite: electric car programs (or programs for any vehicle that doesn’t burn hydrocarbons) at the major manufacturers are small to non-existent, constituting an average of far less than 1% of their total vehicle sales.

At best, the large automakers are producing electric cars with limited range in limited volume. Some produce no zero emission cars at all.

Given that annual new vehicle production is approaching 100 million per year and the global fleet is approximately 2 billion cars, it is impossible for Tesla to build electric cars fast enough to address the carbon crisis. By the same token, it means the market is enormous.

Our true competition is not the small trickle of non-Tesla electric cars being produced, but rather the enormous flood of gasoline cars pouring out of the world’s factories every day.

We believe that Tesla, other companies making electric cars, and the world would all benefit from a common, rapidly-evolving technology platform.

Technology leadership is not defined by patents, which history has repeatedly shown to be small protection indeed against a determined competitor, but rather by the ability of a company to attract and motivate the world’s most talented engineers. We believe that applying the open source philosophy to our patents will strengthen rather than diminish Tesla’s position in this regard.

This article originally appeared here on the Daily Reckoning.

Josh Grasmick is managing editor of Tomorrow in Review and associate editor of Technology Profits Confidential and Breakthrough Technology Alert. After graduating from Washington College with a degree in English, the self-described autodidact was interviewed by Time magazine for his novel entrepreneurship and worldwide eco-adventures. His experience with those in the fields of science, medicine and technology puts readers ahead of the curve and on top of the market.

How to embrace “gross” gunfighting tactics to survive