For as long as humans have banded together in tribes and social groupings, they have relied on one person in their group to act as a healer. We often call them shamans or medicine men. And although we tend not to think of them as useful as modern physicians, their medicines can be far more powerful than anything known by Western cultures.

My friend Mark Plotkin, an important ethnobotanist who explores for plants in the tropics, likes to tell a story about one of his encounters with a shaman and a powerful medicinal plant. He told the story last month at the TEDGlobal conference I attended on the Copacabana beach in Rio de Janeiro, and I got him to tell it again at a dinner in Washington, D.C., last week.

Plotkin’s tale begins four years ago when a climbing accident left him with an injury common to professional tennis players and a lot of pain in his foot. Despite giving it time to heal and seeking medical treatment, it became both acute and chronic. “I tried every medicine and every drug my doctors could think of, including heat, cold, aspirin and other anti-inflammatories, a narcotic painkiller, cortisone and even acupuncture.” None of it helped.

Plotkin’s work as president of the Amazon Conservation Team, which helps protect uncontacted rainforest tribes, often takes him deep into the Amazon basin. One day a few months after the injury, he was visiting a remote rainforest tribe known as the Tirio, on the border of Suriname and Brazil:

The shaman in the tribe comes up to me and says, I’ve noticed there’s something wrong with your foot. So I told him, yeah, it’s in a lot of pain. So he grabs a machete and tells me to take off my boot. Then he goes over to a palm tree, and growing on the palm was a fern. Now, ferns are believed by pharmacologists to be inert as far as containing useful medicinal chemicals. So he cuts off some leaves from the fern and throws them in the fire. Then he takes them and wraps my foot in them. They were very hot and even singed my skin. Then he made a tea from the leaves and had me drink it. The next day, my foot was like new.

Plotkin’s severe pain disappeared for about seven months and then returned. So he went back to the shaman, who repeated the treatment, and the foot has been pain-free since. 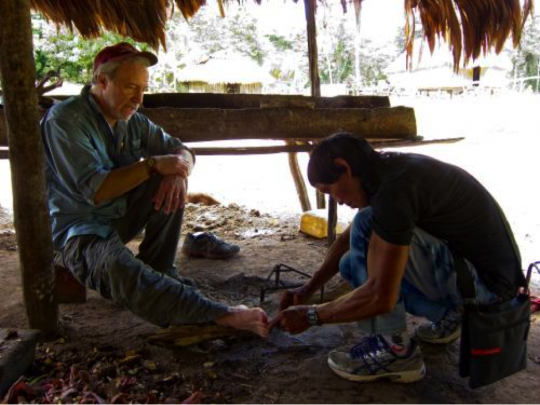 Stories like these never surprise Plotkin when he hears them, but they always create a look of “Really?” among Westerners. Although Plotkin admits there is always the possibility of a placebo effect, he is convinced there was a chemical in that fern tea that cured him and he points out that we are still searching the rainforests of the world for medicinal plants, and we are constantly finding new ones.

The basis of early medicine was plants, and we tend to think of a time when people healed themselves with plants as a world of the past.

Modern medicines are derived from good chemistry in a lab, right?

We forget, for example, that penicillin is purified from a mold growing on a melon. We can’t make it in a lab with chemicals.

Even today, more than 75% of the people in the world still turn to herbs and plant-derived products as their primary medicines. The cancer drug Taxol is derived from the Pacific yew, for example. And there are more than a hundred modern prescription drugs derived from plants. Most people seem unaware that the very first active ingredient extracted from a plant source more than 200 years ago is still our best defense against severe pain — morphine.

The plant is the poppy flower, Papaver somniferum. Morphine was extracted from it by a German assistant pharmacist — Friedrich Sertürner — in 1804. By 1817, he was selling it in his apothecary shop, and in 1827, when Merck established a manufacturing center in Darmstadt, it began production of morphine in quantity. Morphine is an alkaloid, and Sertürner separated it from the poppy’s milky sap that can be refined into opium.

The use of opium goes well back into antiquity. It is the most commonly mentioned medicinal plant in The Iliad, and an ancient tomb in Crete shows a goddess with opium poppies growing from her head. As old as the use of opium is, Sertürner did something with it that had never been done before and is worthy of historic note: He created the first active ingredient derived from a plant source. Well, not exactly — it was the first recorded by nonindigenous people. He named it morphine after the Greek god Morpheus, who is said to appear in dreams. People given morphine often fall asleep. 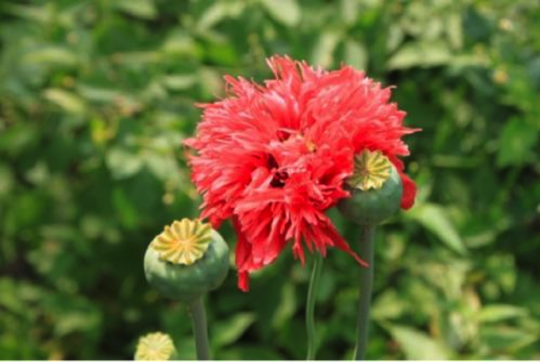 After the hypodermic syringe was invented in the 1850s, morphine use became even more widespread because a shot of it could relieve extraordinary pain within seconds. Ever since, it has been the only buffer against unbearable pain that Westerners have, and it is so important that it is sold under more than a hundred brands around the world.

In 1977, the World Health Organization placed morphine on its first list of 200 or so essential medicines. The only other painkillers that make the list are aspirin, ibuprofen, acetaminophen and the opiate codeine. None of them can provide the kind of relief from intense pain, such as postoperative pain or battlefield wounds, that is provided by morphine. Unbearable pain is thus a condition most people in developed countries rarely experience.

There are two key factors to know about morphine. First, one of the reasons it works so well is that it interacts with the central nervous system. Second, it can be highly addictive, among other significant side effects. Morphine is the chemical cousin of heroin, both derived from the poppy plant.

Morphine, like heroin, has what is called a euphorogenic effect. It makes you feel happy, which helps create addiction. (The human body can make its own opiates, such as endorphins, which is why runners keep running until their knees collapse.) Morphine also can depress breathing. The initial dose of morphine taken after an operation is 5–30 mg. Overdoses of as little as 200 mg can cause death. Withdrawal symptoms for patients who have been receiving morphine for extended periods can be ugly and difficult.

The addiction problem has led more than one pharmaceutical company to seek an alternative to morphine that could be given more freely.

Yet the only alternatives that work well, such as oxycodone, hydromorphone, fentanyl, pethedine, and meperidine, are themselves opiates and addictive. Patients who are properly administered a controlled-release form of morphine should not develop a tolerance to the drug, but there is quite a mythology surrounding morphine, including reports of patients requiring doses above 2,000 mg. The tolerance controversy has tended to limit the amount of opiate pain relievers given in hospitals and spurred a further controversy about terminal patients not being given adequate pain relief.

Trevor Saved By His Flintlock Pistol

Should you get these identity protection services?

Would you pay a ransom or not?