Home Black Bag Confidential Your Right to Shoot to Kill

Today’s article comes from a good friend of mine, Danny Lane.

Danny is a renowned instructor with the United Fighting Arts Federation, a martial arts organization founded by Chuck Norris. He personally trained with Chuck for 36 years, earning a seventh-degree black belt. 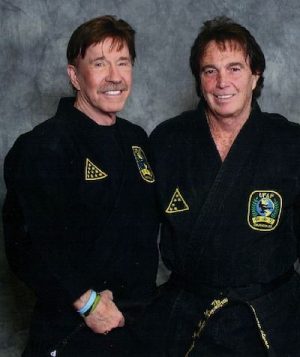 Not only is Danny a martial arts expert, but he’s faced — and survived — hundreds of real combat situations in the jungles of Vietnam and on the streets of America as a combat Marine, police officer and security expert.

If the stuff ever hits the fan, Danny is definitely one of the guys I want by my side, and I’m glad he’s part of our team.

Check out his advice on what to do if you’re ever compelled to use deadly force in the event of a home invasion.

It’s winter. The temperature is below freezing. You hear the sound of breaking glass. Your kids start screaming.

An intruder is at your front door. You wake up in your underwear, unlock the gun safe next to your bed, remove the .45-caliber Glock inside and go to the door — but you can’t see who is on the other side.

Now, I should tell you this isn’t a hypothetical situation. It actually happened to a client of mine. And it gets worse.

While he assessed the situation at the front door, his wife, an Army captain and physician, grabbed her 357 Ruger and went to protect their kids.

My client commanded the intruder to leave or he would shoot him. Undeterred, the intruder shrieked back, “I will shoot your whole ******* family!”

The intruder continued trying to gain entry, so my client fired three shots through the door.

At this point, my client’s wife came downstairs and the intruder started toward her. She fired twice, missing him. Then the intruder bolted across the street and tried to break into another home — deranged and screaming all the while.

My client’s wife called 911 to report the situation. While she was on the line with the emergency operator, the intruder returned to my client’s house, charging at him at full speed. My client remained on his property and stood his ground.

Fearing for his life, my client fired four more rounds, killing the intruder inches from him. All his shots struck the intruder in center mass — just like I teach.

As soon as the police got there, my client was immediately charged with murder.

The police thought that since my client and his wife were armed and inside of a locked door, they were not in fear of their lives. Therefore, they had no reason to shoot through the door or go outside to keep their eyes on the intruder. Prosecutors agreed with the police and used this argument to support the murder charge at trial.

Fortunately, the jury returned not guilty verdicts on all counts. They determined that my client had acted in accordance with the law and fired in fear of his life and to protect the lives of his wife and children.

This is why there is no substitute for training.

I also suggest you become familiar with your state’s laws on this issue, so you’ll know your legal rights if you ever have to use deadly force to defend yourself.

The majority of states have a stand-your-ground law or no-duty-to-retreat law, which can be used as justification in a criminal case.

Basically, these laws stipulate that a person can stand their ground and use otherwise unlawful force without retreating in order to protect and defend themselves or others against threats.

Put another way, if a person is somewhere they have a lawful right to be — like their home — they have no duty to retreat. They are permitted to use any level of force if they reasonably believe the threat of serious bodily harm or death exists.

However, the stand-your-ground justification can’t be used in cases where the defendant was engaged in illegal conduct at the time.

Another common legal doctrine in the United States is the Castle Doctrine, which grants a person immunity from liability when an intruder enters their home. It can also include a vehicle or any other place a person legally occupies — although these specifics vary by state.

The Castle Doctrine isn’t a defined law. Rather, it’s a set of principles that can be incorporated in the local laws of different jurisdictions.

Of course, these laws and doctrines are not without controversy. Stand-your-ground laws are often criticized. They’ve been referred to as “shoot first” laws by politicians. And some legal experts argue that stand-your-ground laws make it difficult to prosecute cases against an individual who shoots someone and then claims self-defense. The shooter can argue that they felt threatened, and most of the time the only other witness is the deceased.

I hope you are never faced with a situation like my client’s, but if you are, you should be familiar with the laws in your state, so you can legally protect yourself.

How to safely help law enforcement in an emergency