Home Laissez-Faire Today No Matter Who Wins, a Sociopath Is Elected

The midterm election season is upon us, and it’s a tossup whether the Republicans will win the Senate, or if President Obama, seemingly oblivious as conflict flares up around the world, will, through his continuous campaigning, keep Harry Reid in his majority leader seat.

The only thing we know for sure is that sociopaths will be elected.

The electorate must by now recognize they are electing incompetents at best, and at worst, crooks, but the constant, naïve, pro-democracy mantra is, “We just need to elect the right people.”

But, the “right people” aren’t (and won’t be) running for office. Instead, we will continue to have “the average American legislator [who] is not only an ass,” as H.L. Mencken wrote, “but also an oblique, sinister, depraved, and knavish fellow.”

The Sage of Baltimore had it correct that to be elected and stay elected in American politics to any full-time position requires the suspension of any ethics or good sense a person may possess. Even those who begin political careers with the best intentions and have measurable abilities that would make them successful in any field soon realize that the skills required to succeed in politics are not those required outside politics.

“The only improvements take place in the process of doing bad things: lying, cheating, manipulating, stealing, and killing. The price of political services is constantly increasing, whether in tax dollars paid or in the bribes owed for protection (also known as campaign contributions). There is no obsolescence, planned or otherwise.”

Politicians clearly don’t seek office for the money. Most are already wealthy by most people’s standards. The Center for Responsive Politics reports that more than half of Congresspeople are millionaires; the median net worth of House members is just short of $900,000, and for Senators, it’s $2.5 million.

What makes the wealthy and successful want to hold office? Is it, as Charles Derber describes in The Pursuit of Attention: Power and Ego in Everyday Life, that politicians since “Caesar and Napoleon have been driven by overweening egos and an insatiable hunger for public adulation”?

The work of psychologist Abraham Maslow provides an understanding as to why people seek public office. Maslow is famous for the “hierarchy of needs” theory you learned in your college psychology, management, or marketing class. The theory is generally presented visually as a pyramid, with the lowest or most basic human needs — physiological needs — shown as a layer along the base of the pyramid. 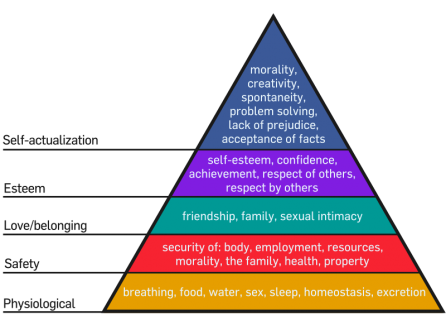 Maslow’s view was that the basic human needs — thirst, hunger, breathing — must be satisfied before humans can accomplish or worry about anything else. The next tranche within the pyramid, shown on top of the physiological need, is the safety need. After satisfying thirst and hunger, humans are concerned about their continued survival. If a man is constantly worried about being eaten by a tiger, he doesn’t concern himself with much else.

The next layer presented within Maslow’s pyramid is the belonging need, which lies just above safety need. After the satisfaction of the two lower needs — physiological and safety — a person seeks love, friendships, companionship, and community. Once these needs are satisfied, according to Maslow, humans seek the esteem need.

These first four needs were considered “deficit” needs. If a person is lacking, there is a motivation to fill that need. Once the particular need is filled, the motivation abates. This makes these needs different than the need at the top of Maslow’s pyramid, the need for self-actualization. The need for self-actualization is never satisfied, and Maslow referred to it as a “being” need, or the need to be all you can be.

Thus, humans continually strive to satisfy their needs, and as the more basic needs are satisfied, humans move up the pyramid, if you will, to satisfy higher-level needs. Of course, different humans achieve different levels, and it was Maslow’s view that only 2% of humans become self-actualizing.

Maslow studied some famous people along with a dozen not-so-famous folks and developed a list of personality traits that were consistent with people he judged to be self-actualizing.

Besides being creative and inventive, self-actualizers have strong ethics, a self-deprecating sense of humor, humility and respect for others, resistance to enculturation, enjoyment of autonomy, and solitude instead of shallow relationships with many people. They believe the ends don’t necessarily justify the means and that the means can be ends in themselves.

One quickly notices Maslow’s self-actualizers have nothing in common with politicians in a democracy. But a step down from the top of the hierarchy of needs pyramid is the need for esteem. Maslow described two types of esteem needs, according to Maslow expert Dr. C. George Boeree, a lower esteem need and a higher one.

And while the higher form of esteem calls for healthy attributes such as freedom, independence, confidence, and achievement, the lower form “is the need for the respect of others, the need for status, fame, glory, recognition, attention, reputation, appreciation, dignity, even dominance.”

“The negative version of these needs is low self-esteem and inferiority complexes,” Dr. Boeree writes. “Maslow felt that Adler was really on to something when he proposed that these were at the roots of many, if not most, of our psychological problems.”

Today we see these qualities displayed by virtually all politicians in democracy: the constant need for status and recognition. The ends — compensating for an inferiority complex — justify whatever the Machiavellian means.

Because democracy is open to any and all who can get themselves elected, either through connections, personality, or personal wealth, it’s a social system where leadership positions become a hotbed for sociopaths. Maslow’s self-actualizing man won’t have an interest in politics. In contrast, those stuck on the need for esteem are drawn to it like flies to you-know-what.

What Doug Casey calls the “moral rot” in Washington, DC, and every statehouse around the country is due to, as Casey writes, “a certain class of people — sociopaths — [being] fully in control of major American institutions. Their beliefs and attitudes are insinuated throughout the economic, political, intellectual, and psychological/spiritual fabric of the U.S.”

Religious philosopher Saint Augustine was pessimistic of human nature, believing men weren’t inclined toward righteousness, but instead had a tendency toward doing evil “as the result of Adam’s fall, pride, vanity, and libido domini — the lust for domination — entice men towards waging wars and committing all manner of violence,” explains John Mark Mattox in Saint Augustine and the Theory of Just War.

Fox News’ Judge Andrew Napolitano has made the point many times that libido domini is the thing in human nature that attracts people into government, in order that they may dominate their fellow man — that the same men who founded the United States government wrote laws as repugnant as the Alien and Sedition Acts.

Those wishing to get elected and stay elected must be prepared to break every moral rule they have ever known, if the end justifies it. Economist Frank Knight noted that those in authority:

“would have to do these things whether they wanted to or not: and the probability of the people in power being individuals who would dislike the possession and exercise of power is on a level with the probability that an extremely tender-hearted person would get the job of whipping master in a slave plantation.”

And so, this election season, remember that it’s become “a psychic impossibility for a gentleman to hold office under the Federal Union,” as Mencken wrote. Democracy makes it possible for the demagogue to inflame the childish imagination of the masses, “by virtue of his talent for nonsense.”

Size matters or does it? (best pistol frame for you)