In announcing QE3, Ben Bernanke’s words betrayed not the slightest doubt that this is the right thing. More Fed bond purchases, combined with three more years of zero interest rates, he said, will quicken economic growth and cause unemployment to fall. And the punditry class all nodded in unison.

I know that this is government and such officials have to pretend to be infallible. It’s their way. The slightest indication of doubt can cause the whole propaganda apparatus to unravel. But for any thinking person, his arrogance alone raises questions about the credibility of his policy. It is all the more suspicious that the elites tell us that he should be believed unquestioningly.

Those of us who knew with certainty that QE1 and QE2 would not accomplish those goals — he’s been at this for nearly five years! — could only stare in amazement at his certitude. It is actually extremely alarming. Nothing could be more dangerous than a Fed chairman with a bad theory of economics that he is dedicated to pushing until the bitter end.

The truth is that he is wrong. Does he know this in his heart? Hard to say. He does know that this policy is good for the people and causes he really cares about. On paper, the Fed has a dual mandate to push maximum employment and stable prices, but this is only the intellectual gloss. In reality, the Fed has dual clients: the banking/financial sector and the government. His policies are good for both, for now. They are not good for the rest of us.

Bernanke is quick to cite the academic literature. But only of a special type: the studies that reinforce his views. His citations are cherry-picked in the extreme. He completely ignores and disdainfully dismisses anyone who has doubts that bond purchases by the Fed are going to cause the economy to get on track.

Following the announcement of QE3, I was invited to be on a panel on the live feed at The Huffington Post. I was there with a Washington Post reporter, along with some economics bloggers and writers. It was five against one. They were all confident, in various degrees, that the chairman was doing the right thing, and bristled at any suggestion that there was a downside or that the Fed chairman might not be the policy genius he thinks he is.

What will be the effects of QE3? This much we know: The economy is not suffering for lack of QE3. The economy is suffering because of a broken banking system caused by QE1 and QE2. The capital sector is laden down with artificiality, thanks to QE1 and QE2. Unemployment remains high, and nearly catastrophic for young people, thanks to the high costs of hiring due to regulations and mandates.

And actually, even the number of the QEs is wrong. This isn’t No. 3. This whole policy actually began after Sept. 11, back in 2001, pushed as a way to stabilize the system following the terrorist attacks in order to put U.S. national honor on display. The result was what is now commonly called the “lost decade,” in which middle-class household income was devastated and American standards of living slipped into a relentless fall. 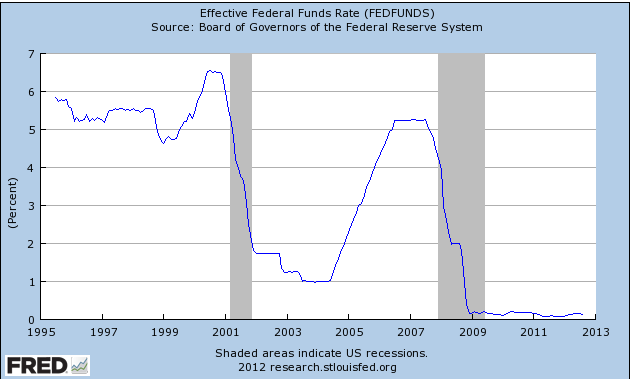 There it is in blue and white. Look at this: Artificially low interest rates haven’t caused prosperity. They have caused the opposite. Even the graph itself looks eerily like a heart rate monitor.

Rather than admit error, Bernanke is like an arrogant old-world physician who is sure that bleeding is the only way forward. If it doesn’t seem to work, it can only be because it wasn’t done enough. Indeed, bloodletting itself was a common practice from the ancient world until the late 19th century — historical proof that a bad practice can continue for ages despite any evidence of its success. For centuries!

Loose monetary policy is the bloodletting of the 21st century, a policy that persists simply because so many people are intellectually invested in it and are unwilling to face the evidence of the failure of their own theory.

QE3 reverses none of what ails the economy. It doesn’t reduce hiring costs. It doesn’t contribute to liquidating bad investments and inspiring the development of solid new ones. It doesn’t reward the sacrifice of current consumption for future investment that is necessary for the building of future prosperity. All is does it drain economic energy. It only means more bleeding of the patient.

So let’s look at the actual effects of this policy:

1. QE3 kills the traditional institution of saving for a generation. It used to be that responsible people would save money, putting it in banks to earn interest. The interest earned was the reward for forestalling current consumption. It’s the parable of the talents all over again. Not everyone wants to be an investor. But everyone can put money in the bank.

What can we do now? You feel like a chump when you look at your bank statement. But don’t blame the banks. Blame the central banks. Bernanke is the one controlling this system, driving interest rates to zero precisely to punish your saving and cause you to splurge in the hopes that this will somehow fire up economic growth.

Remember how George Bush urged Americans to go out and spend money after Sept. 11? This, he said, was the best way for average Americans to show the terrorists a thing or two. All these years later, this anti-saving mentality has been the prevailing ideology. The results have been an abysmal failure.

2.QE3 will drive money to financial innovations that make money for insiders, but are forbidding to the rest of the public. New money has to go somewhere. It typically chases the most-fashionable investments, and traditional saving or dividends are certainly not fashionable. What is fashionable is high-speed programmed trading managed by large institutions.

Does no one remember that this is how the housing boom was created in the first place? Institutions bundled mortgages into marketable packages that glossed over critical questions of risk. It was as if risk didn’t exist. Everyone figured that the federal government would come to the rescue should anything happen. Mostly people assumed that nothing would happen.

Then the whole system blew up. Regrets were all around. For a while. Then the elites must have decided that the whole system wasn’t so bad after all, so they attempted to patch it up. QE3 represents an attempt to re-create the bubble economy in the financial sector. Rinse, repeat.

3. QE3 will keep borrowing costs of the federal government at artificially low levels. Ever wonder why Congress and the president act as if economic law doesn’t exist? They used to worry about the cost of borrowing. But now that is driven to zero. The Fed has provided mad-spending politicians the greatest subsidy they’ve ever had. They can run deficits and debts as high as Mars and not worry about the results. QE3 rewards this outlook yet again.

So don’t look for austerity here anytime soon. The chains have been loosed. They will continue their spending rampage. And the longer it continues, the higher the stakes. Interest rates must remain low forever, for even the slightest uptick will blow budget projections to smithereens. This is how the Fed gets the rest of the government invested in its moral corruptions.

4. QE3 will do nothing to reduce unemployment for those who are most affected by it. The new money will cause boomlets and some hiring, but not among the young, who are now at the point of despair. I just took what must have been my 20th phone call from a smart 20-something who is out of work, living at home, despairing for his future prospects, lost and confused, and thinking terrible thoughts. He wanted to know whether Bernanke’s action will help him. Tragically, the answer is no.

5. QE3 will bring inflation. Maybe it will bring hyperinflation. But that only happens if the banks start using their phonied-up balance sheets as the basis for new money expansion. But why would they do this? It is not in their interest so long as the payout rate is near zero. Another scenario that leads to hyperinflation is the global dumping of the dollar and its dethronement from its status as the world reserve currency.

Barring those scenarios, inflation is likely to take different forms. We’ve already seen this in commodities, health care, energy, and education. But what we don’t see is the glorious deflation that would be affecting all these sectors if market forces prevailed — deflation such as we’ve seen in technology that has been such a gift to humanity. It is the absence of a rise in the purchasing power of the dollar that is the real price we will pay.

Or maybe the laws of economics will be repealed by someone. Maybe alchemy will work this time. Maybe something that has never worked in all of human history will suddenly and inexplicably start to work. That’s seems to be what the Bernanke partisans are hoping for.

A main part of the problem here is purely intellectual. The government has socialized the money. It has taken total ownership of it, purporting to manage it in the same way the Soviets claimed they would manage wheat production and heavy industry. No surprise: We see the usual results of socialism in practice: overutilization of resources, diminishing value of the things socialized, and an inability to imagine that the world can work in any other way.

Ludwig von Mises wrote his book Socialism in 1922. It blew the whole idea out of the water. It seems crazy in retrospect, but Mises’ claim shocked a generation of intellectuals. Mostly, they rejected what he said. It took many decades for the faith in the idea of socialism to finally fail.

It’s a good idea to look back at this sweeping work and stand in awe of his argument. How could it have failed to convince? There can be only one reason. Bad theory is like a disease. Once a civilization catches it, it is hard to shake. It’s this way with the idea of monetary socialism. People find it inconceivable that the free market can manage money. We have to have central planners, don’t we, and shouldn’t we trust them all to do the right thing?

Mises’ book is a model, in my view. That’s why we are releasing it with a new introduction this week in the Spy Briefing Club. The introduction is breezy and brilliant, written by one of the world’s foremost experts in the field: Peter J. Boettke of George Mason University. He sets up the context and explains Mises’ position with utmost clarity and enthusiasm. You really must read this, and also Mises’ book itself. The best way is to join the Club. It will remind you just how long error can persist, and what must be done to combat it.