I had previously heard nothing about the tragic and remarkable case of Andrew Wordes of Roswell, Ga., who set his house on fire and blew it and himself up as police arrived to evict him from his foreclosed-upon home. It was Agora’s 5 Min. Forecast that alerted me to the case, and this report remains one of not too many mentions in Google’s news feed.

So I got curious about this case, read some of the background, heard an interview with Andrew and read all the tributes at his memorial service and now I realize he was like all of us living under the despotism of our time. He resisted and resisted as long as he could. But rather than finally complying, he decided that a life that is not his own is not worth living.

It is a dramatic and deeply sad story that should raise alarms about the least-talked-about cost of a state-run society: the demoralization that sets in when we do not control our own lives. (I’m grateful to Glenn Horowitz for his careful reconstruction of the timeline of events.)

The whole ordeal began only a few years ago, when Wordes began to keep chickens in his backyard. His property was on 1 acre, but it was surrounded by secluded woods. He loved the birds, sold and gave away eggs to people and enjoyed showing kids the animals. He was also very good at this job, and being something of a free spirit, he chose to make something he loved his profession.

The city objected and came after him. In 2008, the zoning department issued a warning about the chickens on his property. This was odd because he was violating no ordinance at all; indeed, the code specifically approved chickens on properties of less than 2 acres. Even the mayor at the time objected to the department’s claim, but the department went ahead anyway. A year later, and with the assistance of former Gov. Roy Barnes, Wordes won in court!

But then look: The city council rewrote the law with no grandfather clause. It forbade more than six chickens on any lot, and specified that all chickens have to be in a permanent enclosure. He had tried to get approval for an enclosure, but because his house was on a flood plain, the city would not issue an approval. In the midst of this controversy, a flood did come to his house, and he had to use a Bobcat to move dirt around to save his house and his chickens.

Sure enough, the city then issued two citations for moving dirt without a permit and having illegal, unrestrained chickens. Then, the city refused to submit to FEMA (Federal Emergency Management Agency) his request for reconstruction funds after this storm (individuals on their own cannot get money of this sort). Next, the city contacted his mortgage holder, who was a friend and who had carried his mortgage for 16 years, and pressured her to sell the mortgage to stay out of legal trouble.

Do you get the sense from this that Mr. Wordes was being targeted? Absolutely. And he knew it, too. The Roswell Police Department pulled him over constantly and issued as many tickets as possible for whatever reason, tangling him in more difficulties. Police cars would wait in front of his house and follow him. And when he didn’t cough up enough money (he was nearly bankrupt after all this), they would book him and throw him in jail. This happened on several occasions. Meanwhile, the city itself filed several more suits against him.

It gets worse. The city planners came up with a “Roswell 2030 Plan” that posited a parks area exactly where his home was. Hearing of this, Wordes offered to sell his home to the city, but the city refused. They clearly planned to drive him out of it with this legal barrage. It didn’t matter that Wordes won every legal challenge or managed to get the suits thrown out in court — that only made the city angrier. Eventually, the city managed to a get probated sentence, setting up a tripwire that would eventually destroy his livelihood.

He posted on his Facebook account that he was going to be a attending a political event. While he was gone, his chickens were poisoned. Also poisoned were the baby turkeys, 10 of which were actually owned by the mayor, who was a friend. At this point, he had lost his means of support. While panicked about what to do, he missed a probation check-in. He was ordered to serve the remainder of his probated sentence in jail for 99 days.

While in jail, his home was ransacked and looted. Of course, the police did nothing. In fact, they probably approved it. Also while in jail, the new mortgage holder foreclosed on his home. His entire life was now in sham 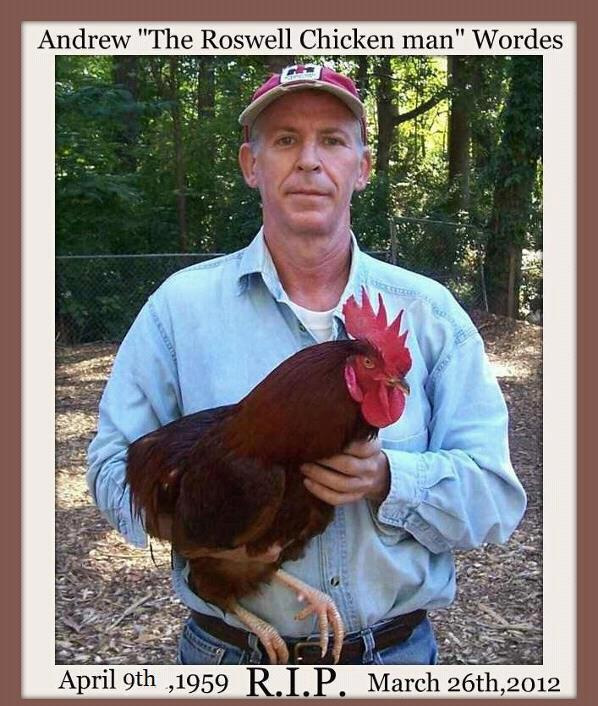 The final episode came on March 26 this year. The police had come for the final eviction. Wordes locked himself in the house for several hours. He then came out and told all authorities to step far away from the house. He lit a match, and the gasoline he had doused all over the house created a gigantic explosion. Wordes’ own body was charred beyond recognition.

Maybe you think that Wordes was some sort of freak who couldn’t somehow adjust to normal life with neighbors. Well, it turns out that he was just about the greatest neighbor one could ever have. At his final service, person after person testified how he would come to anyone’s aid at a moment’s notice, how he fixed things and gave away eggs and was incredibly generous to everyone around him. I listened to an interview with him and found him extremely well-spoken and intelligent.

I tell you, if you can listen to this interview without tears welling up, you have no heart. This man was the heart and soul of what made this a great country. The law hounded and hounded him, mainly because some bureaucrats had made a plan that excluded his home. They carried out that plan. He became an enemy of the state. Demoralized and beaten down, he finally had no way out. He ended his life.

Note, too, that he had the support of the high-ranking members of the political class, including the current mayor and a former governor. Bear in mind what this signifies: The political class is not really running things. As I’ve written many times, the political class is only the veneer of the state; it is not the state itself. The state is the permanent bureaucratic structures, those untouched by elections. These institutions make up the real ruling apparatus of government.

It is hard to say that Wordes made the right decision. But it was a courageous one — at least I think it was. It is a difficult moral choice, isn’t it? When the police come to take all you have and are determined to cut out your heart and soul and reduce your life to nothing but a sack of bones and muscle, without the right to choose to do what you love — and you really see no way out — do you really have a life? Wordes decided no.

The rest of us need to think hard about this case, and perhaps you can also spare a few thoughts in memory of his good life, and even a prayer for his immortal soul. May we all long to live in a society in which such people can thrive and enjoy “life, liberty and the pursuit of happiness.”

Why the Welrod James Bond Gun Might Be Perfect For You

Trevor Saved By His Flintlock Pistol

Should you get these identity protection services?