If you don’t have the angst out of your system concerning Wall Street banksters, Government Sachs, and the Affordable Care Act, settle in with Matt Taibbi’s Griftopia to make your blood boil one more time.

Investors should be reminded of 2008 as they shrug their shoulders and put their money back in the stock market. The whole Obamacare fiasco has blown up in the president’s face, but Americans should know how that legislative sausage was made.

Taibbi is no financial scribe. He writes for Rolling Stone and the like, so he can actually write. He also comes at these issues from a side readers of this page may not normally see. Friends of free markets tend to want to give Wall Street a free pass, believing the nonsense that the financial exchanges are free-market capitalism at work. 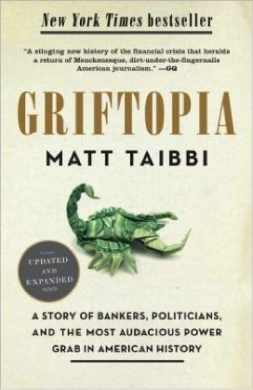 The list of legislation regulating Wall Street is as long as your arm, and it’s the government’s currency they’re trading with. The 800-pound gorilla in the markets is the Federal Reserve. The corner of Wall Street and Broad Street is nowhere near Galt’s Gulch.

Early on, Taibbi writes, “Like most Americans, I don’t know a damn thing about high finance.” He tells the story of how while Wall Street was unraveling, he was covering the 2008 presidential campaign.

What this means for readers of Griftopia is that the author goes to great pains to explain all of that financial gobbledygook in language anyone can understand. If you never quite got the concept of what a collateralized debt obligation (CDO) or a CDO squared, or a credit default swap was, then let Taibbi walk you through it.

While Taibbi leans left, his chapter on the Affordable Care Act is worth the price of the book. Sure, the government website doesn’t work, and every night we hear some new horror story on Fox News. But Taibbi hits Obama’s crown piece of legislation where it hurts. “Really, Obamacare was designed as a straight money trade,” writes Taibbi. Billions in subsidies “and the premiums from millions of involuntary customers in exchange for the relevant industries’ campaign contributions for a few election cycles going forward.”

Echoing Hans Hoppe’s theories about democracy and high time preference, Taibbi harangues the Obama administration for its short-term thinking. “A radical reshaping of the entire economy, for two election cycles’ worth of campaign cash — that was what this bill meant.”

As it is, American health care is no free-market system, and Taibbi knows it. He describes it as “a Kafkaesque parody of corporate inefficiency.” He runs through some studies that point to administrative costs as the culprit for rising costs. Then he talks about the real medical cost smoking gun — the McCarran-Ferguson Act — that said until Jan. 1, 1948, the insurance industry was not subject to antitrust regulation. Even after this date, the industry would be exempt in any case where there were already state laws in place.

Insurance companies collude to set prices, and they do all they can to not pay. Taibbi illustrates this by morphing his Obamacare discussion into the behavior of property and casualty insurers after Hurricane Katrina.

The Democrats could have pursued undoing McCarran-Ferguson, but they instead “decided to try to ensure private competition in the health industry by creating a state-run insurance plan.” Obamacare was driven by chief of staff Rahm Emanuel, and the going price for votes was $100 million on the Democratic side.

Taibbi’s description of the bill’s passage captures the essence of all legislative work. Obamacare was passed “in a romper room of overgrown children seemingly barely old enough to keep from peeing on themselves.”

The author devotes a chapter to trashing Alan Greenspan, “a perfectly two-faced man, serving a perfectly two-faced state.” Taibbi takes some shots at Greenspan’s guru Ayn Rand. While not always on target, some of it is funny. Taibbi’s observation that never in history has there been a funny objectivist may, in fact, be right.

He also points out the irony that an objectivist, who by definition should be opposed to the very idea of the Federal Reserve, would have the job of running a central bank. Taibbi knows enough to recognize the Fed creates money out of nowhere, quantitative easing is “an utterly insane program,” and the Maestro was constantly wrong.

There are instructive chapters on Wall Street’s capture of the mortgage market and the commodity boom. Taibbi leans a bit hard on the idea that the rise in commodity prices was completely engineered by Wall Street, with supply and demand having nothing to do with it.

Where the author really lets loose is in his famous blistering attack on Goldman Sachs, which originally appeared in Rolling Stone. Taibbi updates and adds to his work, which was widely quoted when it first appeared, calling the white-shoe Wall Street investment bank a “vampire squid.”

In the chapter titled “The Great American Bubble Machine,” Taibbi lays out all of Goldman’s connections with government and market-manipulating activities. The author mentions an often forgotten bailout Goldman received in the heat of the financial meltdown. Overnight, the investment bank was granted bank holding company status, allowing them to attract FDIC-insured deposits. This process normally takes months or even years.

That change made the bank’s primary regulator the New York Federal Reserve Bank, whose chairman at the time was former Goldman managing director Stephen Friedman. He was conveniently able to get this violation of Federal Reserve policy waived by the Fed’s general counsel themselves. To top it off, Friedman didn’t divest himself of his Goldman shares, as the law requires. Instead, he actually bought 37,000 more shares.

The government takeover of AIG was really a way to hand billions directly to Goldman Sachs. And Bernanke’s zero interest policy boils down to “taxing Grandma to pay Goldman,” quoting University of Maryland professor Peter Morici.

The tea party can scream from the right and MoveOn.org can cry from the left demanding change. But it’s “groups of anonymous lawyers and bureaucrats and lobbyists” that dictate not only the rules of the game, but who wins and loses.

This linking of government with its preferred industries has turned the economy into a back-alley casino. One operated by Washington’s hidden bureaucrat class and rigged for the political elite to come out on top.

Knowing what you’re up against is half the battle. Taibbi shines a spotlight on the dark alley that connects Wall Street and Washington.

The 3 Vehicles Most Likely To Survive An EMP Attack