Memorial Day weekend is upon us.

And you, like many, may have plans to kick off grilling season with a nice juicy steak.

But before you get to throwing those cuts on the BBQ, you might want to give the label a double-check.

You see, over the last 15 years or so, some meats have been responsible for six outbreaks of food-borne illness according to the CDC. We will dig into this a bit deeper in a while.

Including an extreme case where an Iowa woman named Margaret became so ill from eating a medium rare steak she had to be hospitalized.

In fact, this meat-borne infection was so severe it ruined her colon and almost killed her. Sadly, because of this damage, she now has to wear a colostomy bag for the rest of her life.

And while Margaret’s story is an extreme case, this could happen to anyone who eats a certain type of beef.

But the danger doesn’t lie in the meat itself. It comes from a process so popular that more than 90 percent of beef producers use it.1

For instance, you may have heard that eating ground beef instead of a steak may increase your chances of getting a food-borne illness like E. coli. But an extra precaution is taken with ground beef — E. coli testing.

The problem is this other form of processed beef flies under the radar because it isn’t recognizable like ground meats are. In fact, you would never even know it had been processed.

And it’s even more dangerous because some big beef producers admit they don’t test these cuts for E.coli.

However, the USDA’s Food Safety and Inspection Service (FSIS) is hoping to reduce the risks of you getting sick from it.

Of course, they aren’t taking the steps to end the practice or require testing these adulterated cuts, but instead label them.

Here’s how they can make you sick…

This process, called “needling” or “blading” in the industry, punctures the beef with blades or needles to break down the muscle fiber, which makes the meat easier to chew.

This becomes dangerous when pathogens like E. coli or salmonella are on the surface of the steak. Once tenderized, those bacteria are transferred to the inside of meat, where they can make you sick.

Since there are several outbreaks of food-borne illness linked to this process, FSIS now requires meat packers to label any beef that has been mechanically tenderized and add safe cooking instructions. 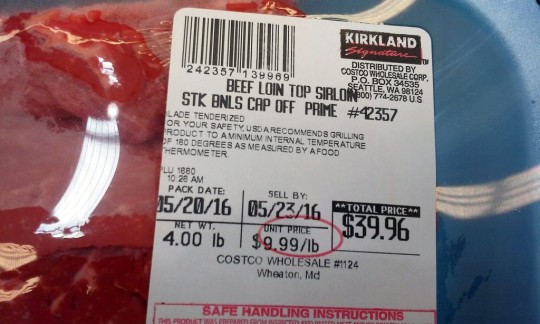 Some companies, like Costco, voluntarily labelled their mechanically tenderized meats even before the requirement went into effect last week. But this kind of transparency was rare among meat sellers.

Without this label, it would be hard to decipher whether your steak was mechanically tenderized. It doesn’t look any different and has no detectable needle piercings.

And since over 2.7 billion pounds of beef labeled for sale in the U.S. are mechanically tenderized, chances you may some in your fridge right now.2

However, just because there is a label doesn’t mean the meat is safe unless it is cooked to a minimum of 160 F.

Considering the popularity of rare and medium rare cooked steaks, mechanically tenderizing could still cause problems for some folks.

If you aren’t willing to give up your rare steaks, it’s probably your best bet to talk to your butcher and find out what cuts haven’t been needled or bladed.

But you may want to do this anyway. I went to the market last night and couldn’t find one package of beef with the label on even though the rule took effect on May 17.

[2] What is mechanical tenderizing, and why is it hazardous to your steak?

Size matters or does it? (best pistol frame for you)